The Mind Illuminated, a journal: Day 9 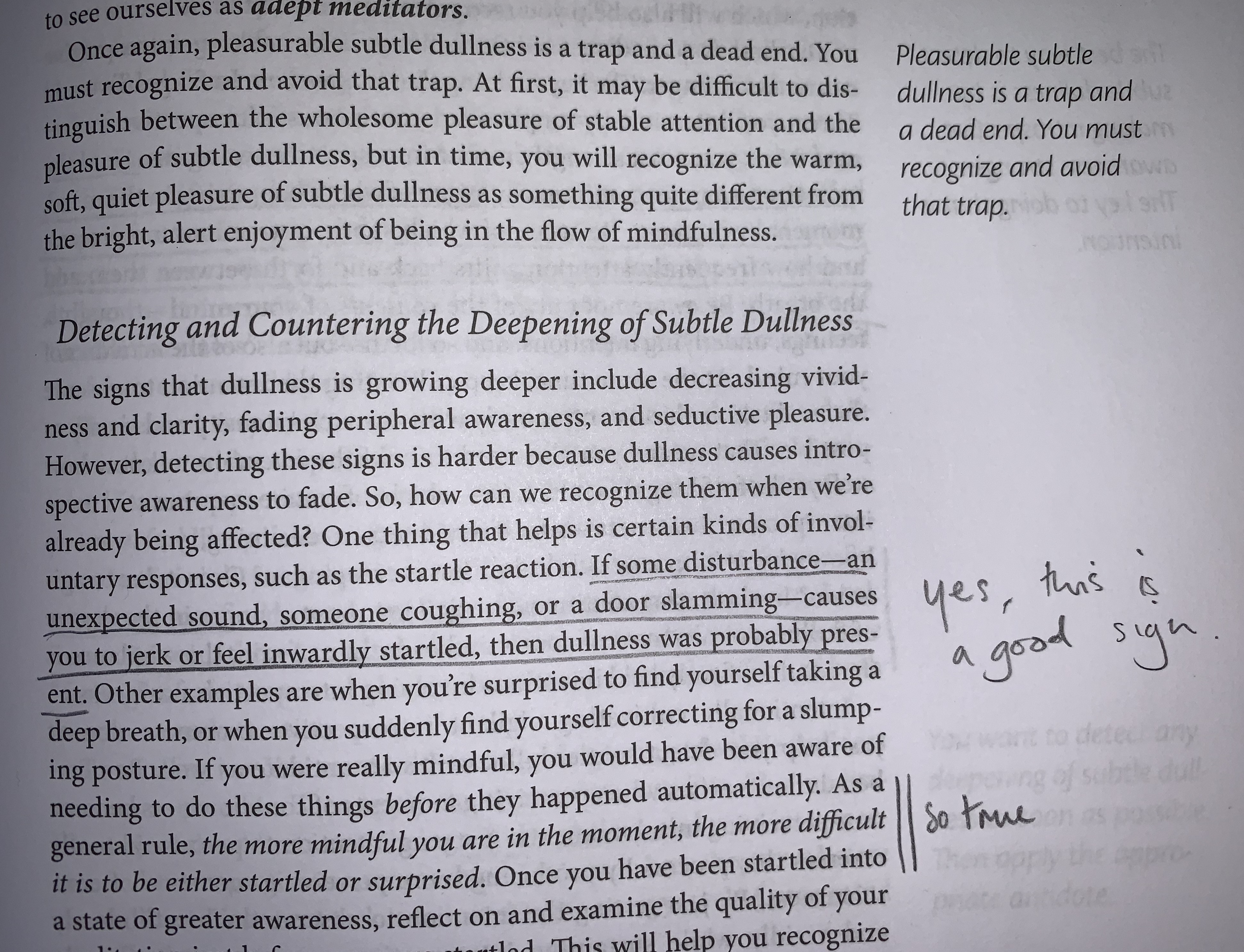 These are reflective notes on my experience of practicing Culadasa’s 10 stage meditation system. The notes in this post are from my ninth day of practice in the system. For an introduction to this project, see this page. Occasionally I will post-edit the journal. Any post-editing is [in square brackets like this].

Notes from the chapter on stage 5:

Focus on finding and noticing subtle dullness. It’s pleasurable and comfortable, but in this state of mind you can be startled, or make an automatic movement without prior intention.

Intentional clear, continuous perception is the antidote, plus vigilance.

It’s useful to read the stage 5 section today because I think it answers the question about whether or not the deeper, pleasurable and strongly absorbed state I was working yesterday is a stage of this path. (No, it’s considered an obstacle.)

Stage 5 introduces a body scanning technique, close examination of sensation in a series of body parts, noticing in particular sensation related to the breath in those physical body-part locations.

I have almost no experience with body scanning. I attended one ten-day S.N. Goenka retreat some years ago and practiced body scanning during that retreat.

Use ‘careful scrutiny’ (p. 177) and notice connections to the breath. But this is described as no longer analytical investigation, it is experiential – the re-directing of attention. Once perception is more sensitive, shift back to the nose. When heightened perception of sensitivity declines, go back to the body scanning (p. 175).

“Use the body scanning technique when you are already in a clear, focused state of mind” (p. 177).

This is a fundamental difference between Sutric and non-Sutric approaches to meditation. Experientially in Vajrayana, you train presence of awareness with whatever arises…so there can be no distraction – it’s not a concept in the referential framework of either the path or the result. There is only more or less clarity; the training is to remain uninvolved (that is, in shi-ne meditation). If a sound, mental or external, ‘sucks you in’ so that your field of awareness collapses into it, you train to expand awareness in all directions out from the sound, in other words, ‘remain uninvolved’ in the sound, maintaining presence of awareness. The movement of awareness is from mental/emotional/psychological involvement, outwards in all directions towards uninvolvement. Whatever arising is whatever it is. It doesn’t have a role to play, or any agency of its own. It cannot distract, because there is nothing to distract from. Understanding this experience of ‘distraction’ in meditation is really important for me. I see it as an experience created by the method (an aspect of the path in the TMI system) which can then be treated as an obstacle and worked with, to stabilize concentrative stability.

This wasn’t the same state of mind, qualitatively, as né-pa.1 Less expansive, more ‘absorbed,’ quieter. The words ‘stillness without emptiness’ come to mind to describe it. There was a sense in which, if I’d been forced to move my limbs, or head, or open my eyes, the state would be ‘broken’. This does not describe né-pa.