I love birds. In particular, I love vultures. Vultures are obnoxious, messy, noisy and greedy. Just like tantrikas.

They are also cautious, careful, alert, and unafraid to stick their heads into a jugular. Some tantrikas possess these qualities too.

Vultures dive into the remains of life, the mess and the discards, and clear it up. Once they have an eating project in mind, they’re cooperative and focused. 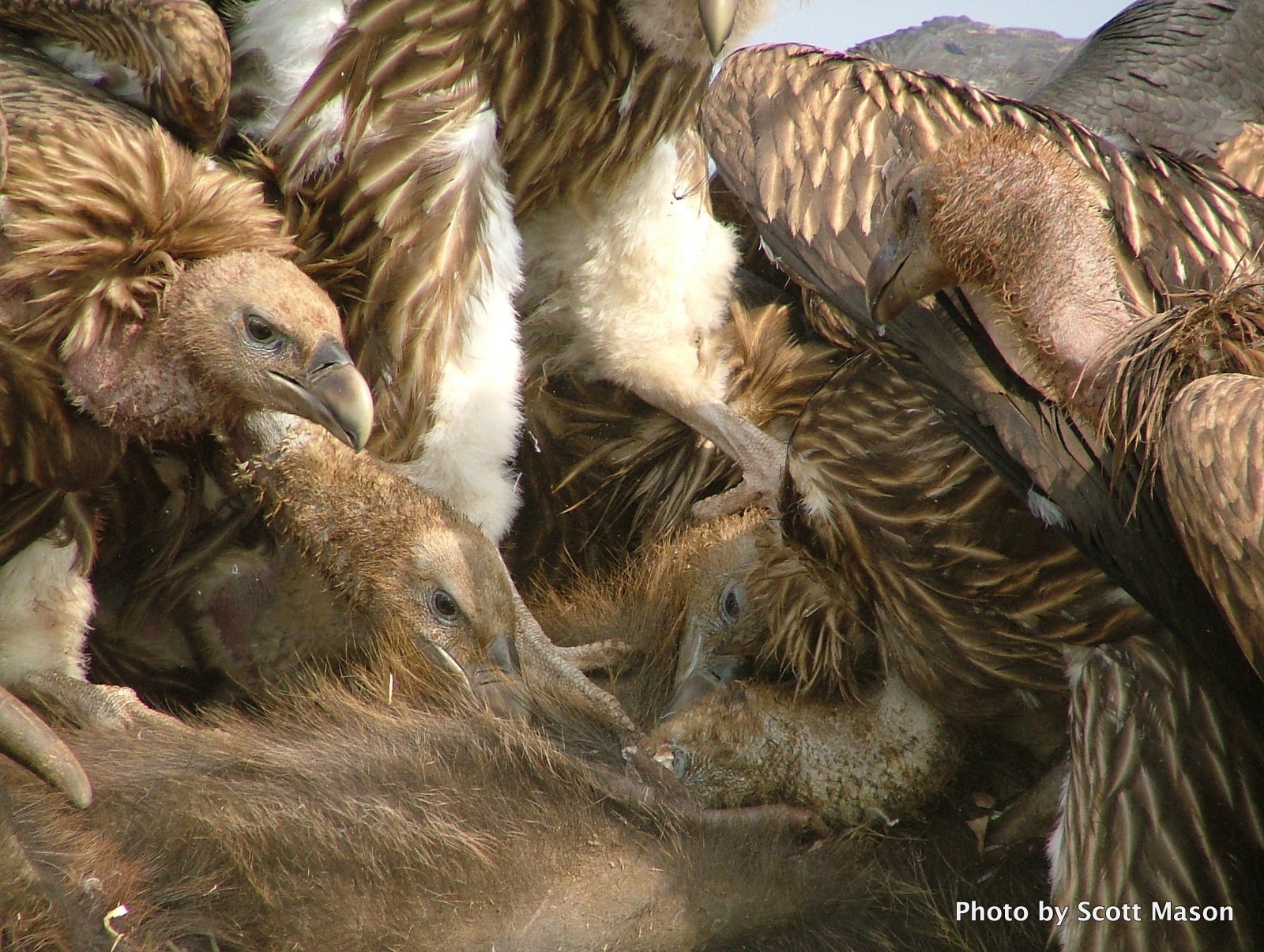 It’s not in the nature of vultures to leave a mess behind. Once they start gorging, it takes a significant threat to divert their attention. 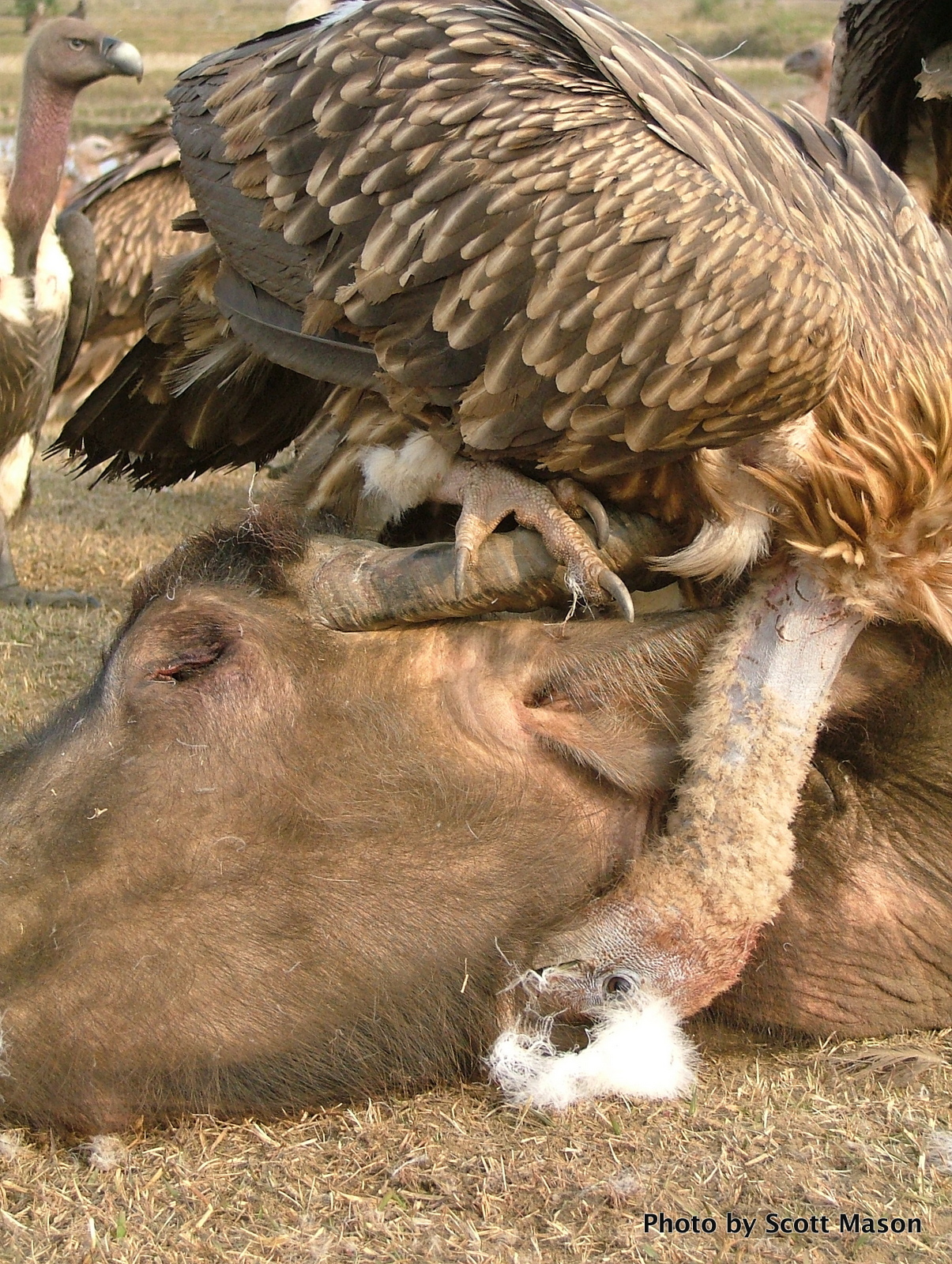 Not only do vultures perform a valuable ecological function, but they also party while they’re at it. Then they’re so satiated by the experience that they cannot fly.

For Tibetans, vultures also provide a social function. The natural funeral for a Tibetan at high altitude is a ‘sky burial.’ The ground is too hard for interment, there are no deep rivers for ritual cleansing and convenient corpse removal, and there are no trees to provide wood for cremation. Burial takes place in the air; vultures stand in for the elements of the Earth, transforming the corpse to a skeleton.

When I looked for a video of a sky burial on YouTube, the most popular one was David Attenborough’s account: “Tibetan Sky Burial.” It has beautiful cinematography, amazing images of flying vultures and mountain scenery, and intimate details of Tibetans preparing for ritual. It has gravitas and I recommend it as a feast for the senses. However, it doesn’t include images of the crucial part of the sky burial – the vultures waiting and then preying on the human corpse.  Maybe it was cleaned up for more mainstream consumption.

I found a video on youtube that included a sequence of still images from a sky burial, graphic stills, in which a live human chopped up a dead one. After the vultures had eaten the corpse to the bones, the ‘ro rgyab pa,’ the body-breaking corpse-carrying man — an outcast in Asian society — kindly chopped up the remains to make them more accessible by the vultures. Unlike in David Attenborough’s beautiful work of art, there was no romantic music.

That video has since been removed from Youtube. It was simple and not less disturbing to watch than some that are now available. Additionally, since I first wrote this post in 2013, sky burial has become a tourist activity in Tibet. Youtube videos now include tourists and locals filming the burials on their smartphones. In place of that video here is a different one. Please be warned, it has some very graphic images of the process and has age restrictions. I don’t recommend it unless you actively want to evoke your disgust-horror response today. It also has some fabulous video footage of the wake of vultures.1

Vultures are fearless around death. They thrive on it. But they are in serious danger of extinction. Since 1990 more than 95% of vulture populations in India have died – tens of millions of vultures.2 Their decline results from exposure to diclofenac, a veterinary drug present in the livestock carcasses they scavenge. Without vultures’ reliable efficiency, rabies and other diseases are rising as pathogens are transferred to feral dogs who step in to scavenge for meat.3 The RSPB is working with local conservation organizations in India and Nepal to help prevent Asian vultures from becoming extinct within ten years.4

That the most popular contemporary account of a sky burial on YouTube is sanitized to include everything except the thing itself, is revealing. The encounter with death is turned into a beautiful, aesthetic, romantic ritual. You don’t get close up with death and decay. It’s too shocking. But you can come to terms with it through an encounter with the ritual. You have some exposure to the reality of what happens while watching the sunset. It’s quite appealing; it might even make you want to go there.

Death, decay and transformation are central themes in Vajrayana. Indeed, mortality salience is central to most Buddhisms. Many presentations are possible and suitable for different contexts and audiences. Personally, I prefer the un-romanticized, up-close-and-personal approach. Tantrikas tend to want to leave no bone unturned. Tantra is not nice.

I first got to know vultures personally in 2011 on a trip to Nepal. I was there for a couple of months and the pollution in Kathmandu was bad, so I bailed out to Pokhara for a spontaneous retreat. I stayed in a hut in Maya Devi village. Afterwards, I met Scott Mason and his parahawking team, including Kevin:

Kevin is an Egyptian vulture. He was knocked out of the nest as a chick but saved from death by Scott and his friends. He is one of, usually, 4-5 birds on the parahawking team. I flew with him and another time with his mate Bob.

I already had an association with vultures before meeting Kevin and Bob, through the animals connected to the elements in Tantra. The elements in the Tibetan Buddhist system are earth, water, fire, air and space. In Vajrayana, they are associated with the five Buddha families. Practices related to the five families transform neurotic behaviour into useful action.5 In some systems, the vulture is associated with the water element and the liberation of anger into clarity.

Recently I acquired some Flector™ prescription pads for sciatic injury with instructions to stick them over the painful areas. They are large: about 6 by 4 inches.  Being a tantrika, I opened the whole box and covered as much of my hip joint and posterior chain as I could with this second skin.

I didn’t think to check the ingredients in the Flector™  pads. My boyfriend was reading the small print while I was getting all excited about my new skin. It turned out that the active ingredient was diclofenac.

I hereby issue a health and safety warning to tantrikas:

Flector™ skin patches are all full of diclofenac and UNDER NO CIRCUMSTANCES take part in your own sky burial after using them.  Think of the vultures.

Do other Vajrayana lineages associate animals with the elements, or with other practices? I’d love to hear.

Does anyone know if there is a Tibetan name for the men who carry out and carve up the corpse for a sky burial? I used the word ‘undertaker’ because I couldn’t think of a better word. Knowing the Tibetan would probably make for a better translation. (Late note: thanks to the commenters who helped answer this question. I changed the post text accordingly.)

Postscript: A big thank you to Scott Mason for readily sharing his photos, for advice on the vulture crisis and for his ongoing contribution to maintaining Nepalese diclofenac free vulture restaurants.