The Mind Illuminated, a journal: Day 11 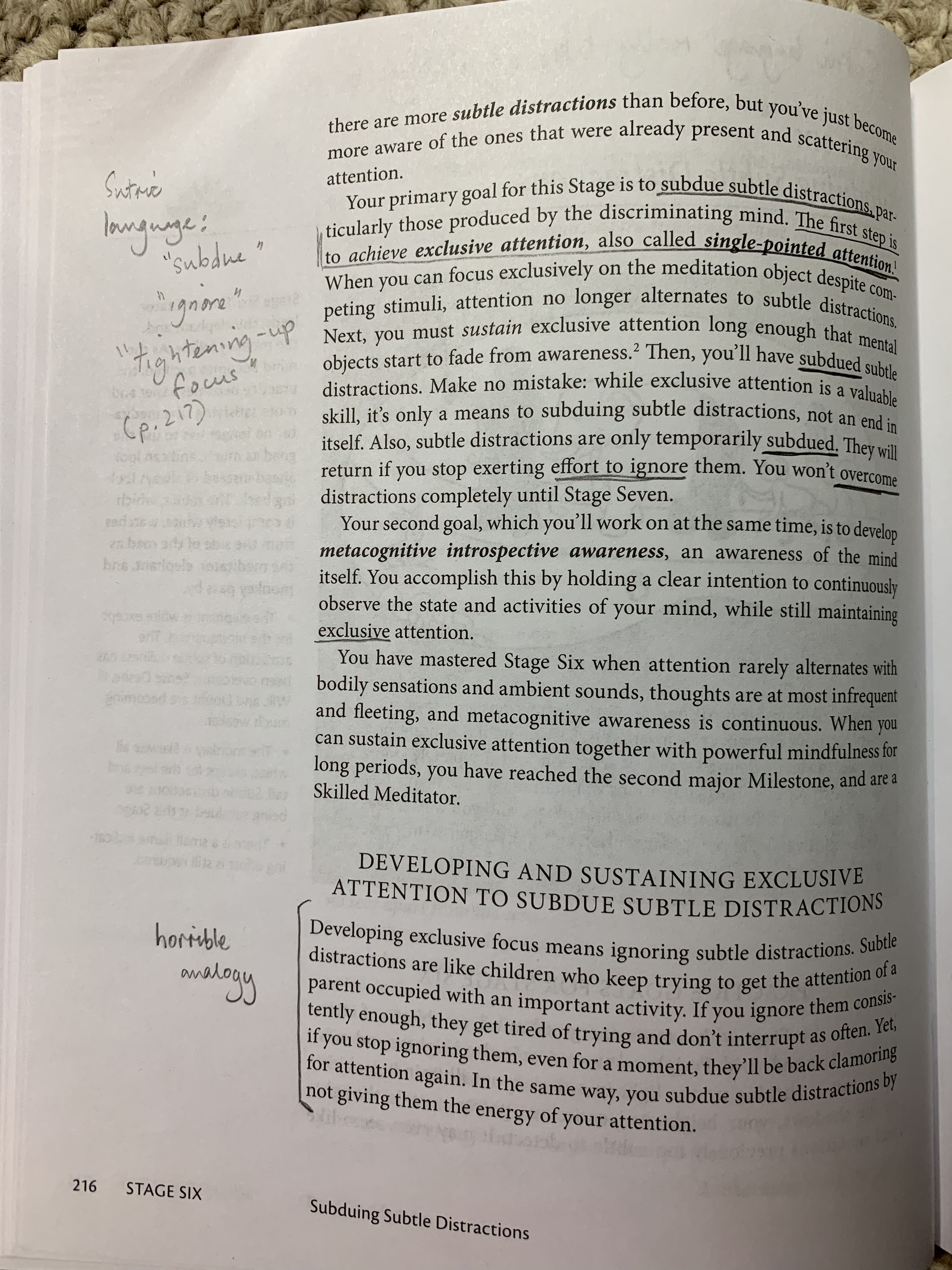 These are reflective notes on my experience of practicing Culadasa’s 10 stage meditation system. The notes in this post are from my eleventh day of practice in the system. For an introduction to this project, see this page. Occasionally I will post-edit the journal. Any post-editing is [in square brackets like this].

The first step of stage 6 is to achieve ‘exclusive attention, also called single-pointed attention’. No alternation from the focus to ‘subtle distractions’. Peripheral awareness remains present.

This leads to sustaining exclusive attention so that mental objects fade from awareness. The instruction is to “completely ignore everything outside” the scope of attention.

The second step in stage 6 is developing metacognitive introspective awareness.

This is a different instruction to the four naljors practice in which you maintain awareness of any content of mind without intentional ignoring. The difference here is between ‘remaining uninvolved’ and ‘ignoring’. These alternate methods lead to different experiences. Remaining uninvolved involves no shift of focus, in that the method favors no one locational priority over another. ‘Ignoring’ involves a shift in mental focus to a foreground other than the form (thought/image/emotion) arising, with the intent for that which is ignored to become background. It’s not intentionally stopped, but it is intentionally disregarded. Expansive awareness has omnidirectional intent; concentrated awareness has unidirectional intent. It cultivates a foreground against a background.

I’d like to say a little here about my experience of expansive practice:

Whatever arises within the scope of awareness does so without magnetizing attention or moving the presence of awareness. Stuff arising becomes ‘transparent’. Without involvement in mental content, thoughts lose specific meaning. They’re like empty shapes floating in and out of consciousness. As stability in the practice of remaining uninvolved increases, fewer thoughts arise. They become less dense, both in quantity and in felt experience. Eventually, they disappear.

With the uninvolvement of expansive awareness, there is no need to ignore the stuff that arises in mind. It dissipates of its own accord, without encouragement.

According to the Mind Illuminated system, I am coming to think that exclusive attention is a different route to that same experience—called né-pa in the four naljors system. This was one of my curiosities going into this experiment: does the TMI system produce that same experience? And, yes it does, but by a different route. In the four naljors, clarity of presence of awareness is cultivated first in shi-ne meditation. That leads to mental forms dropping away in their frequency and magnetic pull. In the TMI system dropping away and lessening of frequency is cultivated first, before clarity.

My access to né-pa has always been previously like a switch flipping: it’s sudden, immediate – one moment you’re in a fog, then the clouds clear, instantaneously. This is the first time I experienced a gradual approach. By analogy, the fog is clearing slowly, though not entirely.

Jhanas are introduced in stage 6. Although I’m familiar with the terminology and understand them as qualitatively different states of absorption, I’ve never intentionally practiced jhanas before.

Any intensive meditation may change the texture of experience outside of meditation. I’m noticing that my default experience during the day outside of sitting is quiet, more thought-free than not; but that the quality of experience is very different from né-pa. This is consistent with the gradual onset of the thought-free state in meditation, but it is a surprise! Whenever I’ve experienced thought/ideation free space previously, it’s been suddenly very bright, clear, and vibrant. Today’s naturally arising experience is much, much ‘quieter’. It’s quite pleasant but in comparison, I find it a little, I dunno, ‘flat’, is the word that comes to mind. Almost like the air between my senses & the world is slightly thick & heavy. But it’s very peaceful & calm; I’d say it’s more ‘still’ than né-pa. At the same time, despite the inner quietude, I’m having strong, positive, appreciative reactions to birds, flowers, water flowing, winter leaving the mountains. This is normal for me, but I’m noticing the appreciation is even somewhat more than usual. Particularly for birds. They’re so hoppy and sweet.